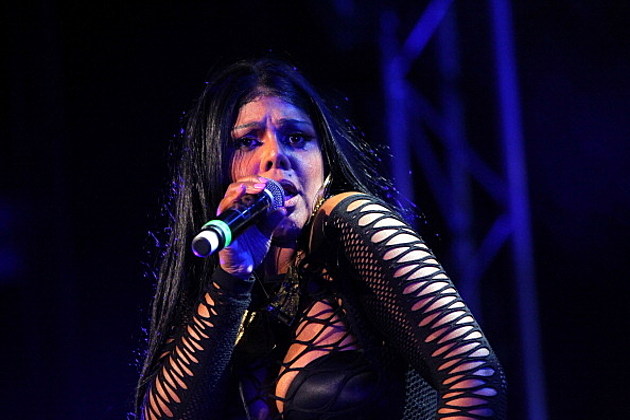 The original Queen Bee. Lil’ Kim stepped on the scene in the ‘90s and forever changed hip-hop. Her sexy, seductive and (for all intents and purposes) graphic lyrics propelled female rappers into a very bold direction -- one they return to time and time again. Kim has a number of classics under her Versace belt. Each of her four albums contains at least one hit, and TheDrop.fm lists 10 of them here. While her cameos on other tracks were pure fire (shout out to 'All About the Benjamins' and Mobb Deep’s 'Quiet Storm'), these are the top Lil' Kim songs where she was in the lead.

'The Notorious K.I.M.'
There was a brief period of time where people thought Lil’ Kimbo Slice lost her nasty edge. Then she comes along with this track and everyone was like, “Oh nevermind. There she is.” With Sisqo from Dru Hill on the hook, Lil’ Kim evaporated inhibitions once again with 'How Many Licks.' She even takes a few bars to sext all of the men in jail who are using her poster as a spank bank. Wow, Kim. Just wow.
Listen to 'How Many Licks'

'Hardcore'
By now, everyone’s heard the reference track where the Notorious B.I.G. is rapping the verses to this 'Hardcore' album cut, leading everyone to believe he penned them. Let’s forget all of that for a second. 'Queen Bitch' was Lil’ Kim’s official battle cry, and while she may not have written those words, her delivery of them is what had the people’s heads spinning. Take Biggie’s tough rhymes with Kim’s slick cadence. The result was just mind blowing.
Listen to 'Queen Bitch'

'The Naked Truth'
The opening line from 'Lighters Up' is “I come from Bed-Stuy,” which automatically ignites an anthem in the name of Kim’s hometown of Brooklyn. Say what you will about Lil’ Kim, but she’s always repped BK to the fullest and bleeds for her borough. That shows on this cut. It’s something that very rarely has a female rapper ever boasted, but coming from the same stomping grounds as Biggie and Jay-Z, Kim has a right to brag.
Listen to 'Lighters Up'

'No Matter What They Say'

'The Notorious K.I.M.'
This track set a dancey tone to Kim’s style. Sure, the song is about flossing on the red carpet and collecting designer labels. That’s the allure of Lil’ Kim though. Beyond being brazen, she was the original designer label name-dropper (sorry Kanye West), and did it at a time when most people weren’t doing it (pre-Shiny Suit Era). By the time this track arrived, though, Kim was in rare form. She’s the Queen Bee -- no matter what they say.
Listen to 'No Matter What They Say'

'La Bella Mafia'
If you didn’t play this song at a party back in 2003, it was like spitting at God. Actually, putting a track like 'The Jump Off' on even right now will get the party started for sure. This track arrived at around the time period that Mr. Cheeks from the Lost Boyz switched his style up a bit to get the hyper club rap fans’ attention. So assisting Kim on this track was both smart and necessary.
Listen to 'The Jump Off'

'Hardcore'
When this track opened Lil’ Kim’s 'Hardcore,' it basically explained everything. “I used to be scared of the d---, now I throw lips to the s--- / Handle it, like a real bitch.” The lyrics, both graphic and bold, re-introduced the world to the First Lady of Junior M.A.F.I.A., ready to stand on her own and speak her mind, no matter how open that mind may be. Lil' Kim never holds her tongue in her rhymes.
Listen to 'Big Momma Thang'

'Hardcore'
The album version of this song solely features Lil’ Kim’s former partner-in-crime Lil’ Cease. It was an odd placement on a solo debut album, but the ultimate gesture of friendship, considering Cease had his own song on someone else’s album. When Kim released 'Crush On You' as a single, she was the star of the show and included a video where Kim’s wigs matched the scenery and artists like the late Aaliyah made cameos.
Listen to 'Crush On You'

'La Bella Mafia'
Many will argue that 50 Cent stole the show on 'Magic Stick' with his tough, slick, metaphorical bars. Maybe it’s because he’s the one with the “magic stick” so to speak. Regardless, it was on Kim’s album, and this song became quite the hit. She also added some flair to the track, so it wasn’t like it was just Fif’s party. This song still circulates to this day, especially when attempting to bring up something perverted.
Listen to 'Magic Stick'

'Hardcore'
“I got no time for fake ones. Just sip some Cristal with these real ones. From East to West Coast spread love, son. And while you keep talking s--- we count bank funds,” Diddy (or Puff Daddy then) raps. Sounds about right. Lil’ Kim’s breakout single as a solo artist boasted Kim’s entry into the good life. With designers, cash, diamonds, and all of the finer things. Kim stated on the track, “And you know, ain’t no one like the Queen Bee.” She was right.
Listen to 'No Time'

'Nothing to Lose Soundtrack'
On 'Hardcore,' 'Not Tonight' was basically a back and forth between Kim and her man about expectations in bed. However, when the track was “remixed,” complete with a 'Ladies Night' tag, it became the “Ladies First” of the ‘90s. Missy Elliott, Angie Martinez and Left Eye all showed up for the occasion to trade bars. Even Mary J. Blige came to the video set for a cameo just to dance around. A good time was had by all.
Listen to 'Not Tonight (Ladies Night Remix)'

Let TheDrop.fm know which Lil' Kim song is your favorite in the comments below.