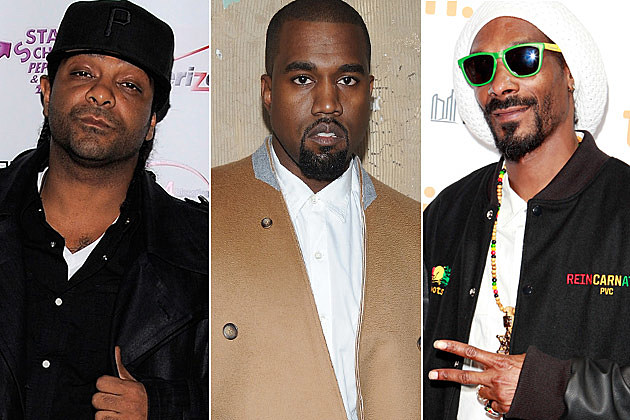 At a glance, hip-hop and holiday music are words that never should go together. Holiday music is supposed to be cheery and fun, while hip-hop often times is characterized by arough exterior (this includes Flo Rida’s physique, but excludes his music). Throughout history we’ve been proven wrong by hip-hop, as artists have crafted some interesting songs to ring in the holidays. We’ve compiled 10 of the best ones. We’d like to take this moment, though, to honor DMX’s recent reprise of 'Rudolph the Red-Nosed Reindeer' to the beat of fists on a table. You’re a contender for next year, Mr. Simmons. Now here's the top Christmas rap songs.

'Eazy Duz It'
Who would have thought that the late Eazy-E would be so full of holiday cheer? Well, this track was basically about Eazy-E getting women. That’s his Christmas gift. On this track, he substitutes “jingle bells” with “ring them bells” and then switches into a whole mashup of famous holiday classics with just a little touch of Eazy. While this probably isn’t the best song to play at Christmas dinner, it’s definitely one for the pimps out there.
Listen to 'Merry Muthaf---in' Christmas'

'Beat Street Vol. 2'
Anyone who caught the legendary hip-hop flick 'Beat Street' will remember the Treacherous Three’s 'Santa's Rap.' In this funny little ditty, each member laments the holidays by basically saying their Christmas was the worst. From having Christmas trees that look like decorated poles to getting Christmas gifts that were hand-me-downs, there was nothing these three didn’t come up with. The light at the end of the tunnel was waiting for a welfare check to fund the holidays.
Listen to Treacherous Three's 'Santa's Rap'

'A Dipset X-Mas'
Livin’ fast and ballin’ at Christmas time. That’s the mantra Jim Jones and his Dipset comrades boast about in this holiday track. While Jones explains on this track that when you’re ballin’ like Dipset, every day can be Christmas. However, here he has some big plans for the holidays -- he even says he might open up a mall. Those are some lofty dreams for Christmas, but why not? It’s Jim Jones and he can do whatever he wants.
Listen to 'Dipset X-mas Time'

'Bad Santa'
With the help of Starr, Juelz Santana puts an interesting spin on the holidays. In the video, Juelz switches from sitting beside a Christmas tree full of women he’s reading stories to, to roaming through a snowy Central Park wearing a Louis Vuitton pashmina on his head while Starr muses about spending Christmas in a high speed chase in Harlem doing 95 mph. Might not be the most ideal way to spend the holidays, but hey, why not?
Listen to 'Jingle Bellz'

'The Best of Kurtis Blow'
Kurtis Blow puts an end to the tired 'Twas the Night Before Christmas' tale from the very beginning of this song. “This ain’t 1823, ain’t even 1970,” he says. Blow launches right into 'Christmas Rappin'' to the tune of Sugar Hill Gang’s 'Rapper’s Delight,' spitting syllable flipping bars about what his Christmas party was like the year prior. There was a band jamming and all that; then everyone ate, drank and spotted Santa. Good times.
Listen to 'Christmas Rappin''

'Christmas on Death Row'
Rest in peace to Nate Dogg, who blessed this track with his soulful crooning in a way that only he could. Snoop Dogg brings Tha Dogg Pound on this smooth cut about Christmas on the West Coast. In the video, Snoop is dressed like Santa Claus. Only he’s in all black, including a long black beard, as he runs through the days of Christmas. Instead of reindeer, he’s flying through the city in a blue drop-top Impala. Amazing.
Listen to 'Santa Claus Goes Straight to the Ghetto'

'A LaFace Family Christmas'
Most people don’t realize that this song is actually a holiday track. If you listen carefully, you can hear the sleigh bells jingling throughout the song. When this track appeared on 'A LaFace Family Christmas' album, the sleigh bells were accentuated to focus on the holiday spirit of the song. 'Player’s Ball' sounded like OutKast was throwing the best holiday party in Atlanta, and everyone was invited. Especially the players. We can’t forget the players.
Listen to 'Player's Ball'

'A Very Special Christmas 3'
Everyone was on this track. Check the credits, because even you might be on it. From Salt-N-Pepa to Snoop Dogg, Onyx, Run-DMC, Ma$e, Diddy and Keith Murray. This song has a hook where the girl is seducing Santa for a light blue convertible and Sticky Fingaz talks about how if he wasn’t a little boy he wouldn’t have had anything to play with. Well then. There you have it. A perfect balance of flirtatious and gross.
Listen to 'Santa Baby'

'Christmas in Harlem'
Teyana Taylor laces the hook to this song about soaking in all of the holidays in New York City’s Harlem. “Even though we ain’t ballin,” Teyana says on the hook, as she and the crew talk about hitting the mall to get their shop on. Cameos include Cam’ron, Jim Jones, Vado, CyHi Da Prynce, Pusha T, Musiq Soulchild and Big Sean. That’s quite a lineup, but if anyone can throw a Christmas party, it’s Mr. West.
Listen to 'Christmas in Harlem'

'A Very Special Christmas'
The most classic rap track about Christmas. With mom cooking chicken and collard greens, Run-DMC celebrate Christmas in Hollis, Queens properly. The beginning of the video starts in Santa’s workshop in 1987, as a devilish little elf ends up messing with the holiday switchboard while Santa Claus is gone. It’s hard to believe this song was actually made 25 years ago. Even though it’s been that long, this is still one of the hottest Christmas songs ever.
Listen to 'Christmas in Hollis'

Let TheDrop.fm know which is your favorite Christmas rap song in the comments below.